How to sound as British as possible. Part #4

Aside from the wide range of local beers, The UK is not the place we would go looking for haute cuisine…. Stop you are all wrong!!!…

A new generation of young chefs is being inspired by high quality food and is taking advantage of Britain´s delicious produce. You cannot forget that, thanks to its weather conditions, the UK has ideal land for farming. The revolution is in full swing!

British food has traditionally been based on a roast (beef, lamb, pork chicken) or fish served with potatoes and at least one other vegetable such as green, very green peas, steamed cabbage or runner beans.

What about a little food review….

Let’s start with breakfast: a full English breakfast usually includes bacon, sausages, eggs and baked beans, but did you know that we also include flat mushrooms and half a tomato. In Cornwall you will have potato cakes, in Ireland you may be given black pudding (and no, it is not a desert, it is du “boudin”). In some parts of Wales you will be given salicornia compote (yes, sea weeds). You can also get porridge, I know the look is no very attractive but it will keep you going all day long! 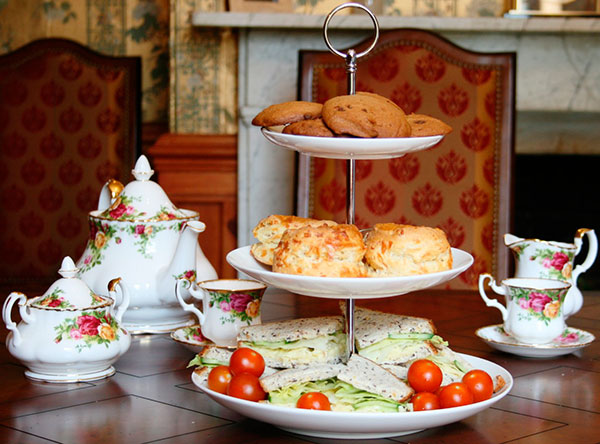 The second most important meal of the day is served at tea time…. Well, maybe the most important! The afternoon tea must not been neglected : you will have finger sandwiches: no it doesn’t mean des sandwich de “doigt” it means that you can hold between two fingers because they are small and delicate. Your selection could hold a cucumber and cream cheese sandwich or wild salmon and cress, or thin sliced turkey and mango chutney and I should not forget the famous prawns with cocktail sauce and baby gem lettuce. Now with the sandwiches you will get a lovely selection of pastries like a macaroon, a raspberry ripple pavlova, a lemon curd pie and above all you will get the traditional gold raisin or plain scones, clotted cream and strawberry preserve. As a scone fan the best way to savour them is to put the jam on top of the clotted cream and not the contrary!! Of course you drink tea with all these delights, and sometimes you can even have a glass of champagne!

Eating like a Brit includes eating Fish and chips: it can be cod (cabillaud), haddock or plaice (plie) deep fried in flour batter with chips (fried potatoes) -beware in France “des chips” are crisps-. This is England’s traditional take-away food. The dish became popular in wider circles in London and South East England in the middle of the 19th century. Charles Dickens mentions a “fried fish warehouse” in Oliver Twist, first published in 1838….

Fish-and-chip shops traditionally wrapped their product in newspaper. Nowadays, establishment usually use food-quality wrapping paper, occasionally printed on the outside to emulate newspaper. Come on let’s go to the chippy and order a fish and chips and by the way don’t forget to cover your chips with vinegar!!!!

Another very common pub dishes would be the Ploughman’s plate (l’assiette du laboureur). It is a cold meal which consists of cheese, ham, pickled onions, chutney and sometimes an apple. This classic was given a name and a PR push in the 60’s by the Milk Marketing Board but never mind this is a much-loved British meal. There is usually more than enough for one, sharing is a pleasure and don’t forget to order a beer each!

Don’t worry about the establishment you are going to use the same knife for the butter, the chutneys and, possibly, the different cheeses. Take a deep breath, feel the fear, do it anyway. This is a ploughman’s. You are not taking tea at the Savoy.

Cheese: Cheddar, Cheshire, Stilton, red Windsor… just to name a few. The UK produces the greatest amount of different types of cheese in the world (700), but they don’t consume as much per person as some other countries. Sorry to say that France is not the only cheese country in the world…In the UK it’s an item that’s high class and to be respected. Don’t laugh I am serious! If you ever go to London and fancy trying British cheese, try Paxton and Whitfield, it’s the Queen’s favourite cheesemonger! Please do not forget the crackers since we don’t have crispy baguette…

I could go on and on… You will have to hold your breath until next time to know what are Welsh rarebit, toad in the hole or bangers and mash…

Categories: On both sides of the Channel

A beginner’s guide to British pubs