How the British celebrate Christmas (part 2)

The Christmas pudding is medieval in origin, it derives from a peasant dish which was made from porridge, animal fat, dried fruit and nuts… It is traditionally made with 13 ingredients, one for Christ and one for each 12 disciples. When the pudding is being mixed every member of the family gives one stir with a wooden spoon. They move the spoon from east to west, in honour of the three Kings. Most of this information is forgotten, meanwhile when you prepare the Christmas pudding, never forget to make a wish! 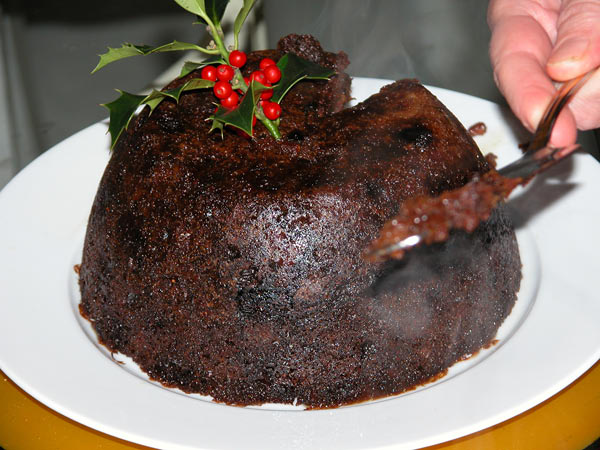 A small silver coin, usually a sixpence is put into the pudding before cooking. The person finding it gets to keep it.

I am often ask when do you prepare the Christmas pudding. Well many people make their pudding a whole year in advance and then leave it somewhere dark and cool to mature. As it has a high sugar content, it keeps for years. Preparing it just after Christmas enables you not to forget to add a piece of the leftover previous pudding. Yes I know but this is a long tradition!

Many people let their pudding “drink” by making little holes on the top of it with a fork and regularly pouring sherry or brandy into it to keep it moist.

Christmas pudding are brought to the table flaming…

Even though it is probably the most traditional Christmas dish, it is fun to make and fun to serve, it helps to make the Christmas a bit more special. Well you still have time to prepare one, so ready to start:

Hummmm try a mini for the first time…

Categories: On both sides of the Channel

How the British celebrate Christmas (part 1)